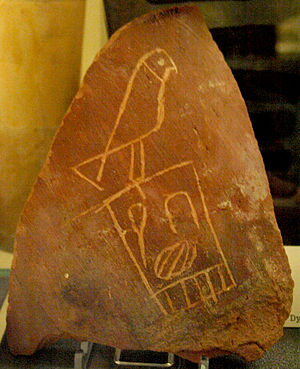 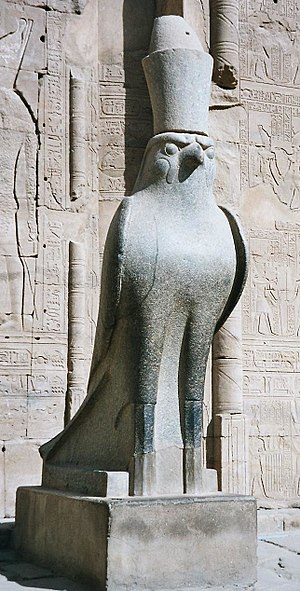 He was represented by: <iron> G5-A40 </ iron> or also <iron> G9-H-Hr: r </ iron> Horus is the son of Isis and Osiris. He was depicted as a hawk or as a man with a falcon head. Wearing the double crown of Egypt on the head. Horus is one of the most ancient Egyptian deities. Now he is worshiped in predynastic times and is part of the myth of Osiris: Seth killed Osiris to usurp his throne. He tore his body and distributed in the corners of Egypt. Isis, wife of Osiris, search and recover the remains of her husband, returning to life to copulate with him and giving birth to their son Horus. When Horus grows and becomes adult fighting Seth for the throne of Egypt
defeating. This myth appears repeatedly with different versions throughout the history of Egypt from the pyramid texts of the early dynasties to the most recent Ptolemaic temples.

From the earliest times the pharaohs were the manifestation of Horus on earth. The pharaohs of the First Dynasty were titled with the name of Horus. It was a vertical inscription starting with a falcon (Horus) perched on a serekh <iron> O33 </ iron> that seems to represent the facade of a palace and into which the name of the pharaoh was written.