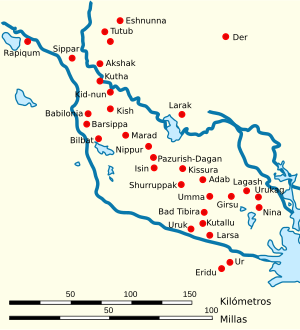 About the fourth millennium B.C. in the Ancient Mesopotamia occurred the transit of Neolithic settlements to the emergence of the first cities in history. The cities began to be the principal place for business and its inhabitants began an intense specialization of labor, so that each person knew only perform an activity.

In Mesopotamia settled cities in the vicinity of the two great rivers Tigris and Euphrates. Crop irrigation channels were created and there were small villages around every big city. The cities were often rivals each other, and were separated by a no man's land, steppe, semi-arid, desert or swamp ... that was used by nomadic peoples for grazing.

The life of the Sumerian cities ran around the temple, because it mastered the politics, economy and of course the religion of the city. The temple owned land, livestock, traded and offered jobs in exchange for land or wages. The high priest was called "En" or "Lord" and was at the same time the highest religious authority and political leader of the city until in the third millennium BC this "En" or "Lord" was replaced by the "Ensi" or "Lugal" who held the military power and had the characteristics of a king. Sumerian cities often made war for dominance of arable land and created a new organization, the army. The distribution of work resulted in the emergence of four large social groups: artisans, farmers, priests and soldiers.

Some of the main cities of the Ancient Mesopotamia were: