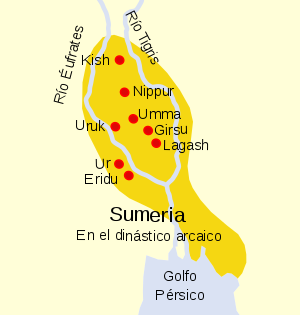 The Sumerian settled in the vicinity of the Tigris and Euphrates rivers, near its mouth in the Persian Gulf. This region is known as Sumer. It is aware of its existence around 3500 BC although its origin is not clear at all. It is not known with certainty whether the Sumerian were indigenous people of Mesopotamia or moved from a nearby area.

Mankind owes to the Sumerian a huge set of advances that meant a great transformation in all aspects of life. Perhaps the most important was the invention of the wheel around 3500 BC and the invention of cuneiform writing around the year 3300 BC but we must not forget that they were the precursors of the first cities (Umma, Uruk, Ur, Eridu, Nippur, Kish and Lagash among others). The Sumerian left us the first written laws, they were the inventors of the sexagesimal system, the beginnings of medicine, and constructions of mud bricks and architectural arches.