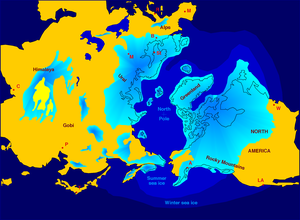 During Paleolithic several glaciations that dramatically changed the climate and conditions of life of our ancestors followed. Major ice ages were:

Between each ice age interglacial periods there were far more benign and temperate climate similar to that we enjoy today.

The change in climate was a challenge for the human species had to adapt to changes in temperature, flora and fauna. The resources available were modified and humanity had to adapt well with migration, by modifying their behavior, either by adapting and evolving its own physical characteristics to the new environment.