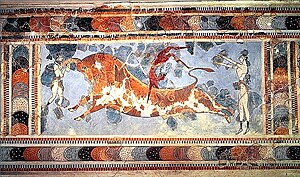 The Minoan civilization dates back to the year 2600 BC environment It is located on the island of Crete. It lasted until 1700 B.C. 1600 B.C. why not being clear. One theory is that a large eruption of Thera (Santorini) was the cause. Others want to identify the Atlantic with the Minoan civilization. The truth is that the Mycenaean eventually occupy the island at around 1600 BC
The main Minoan cities were Knossos, Phaistos and Hagia Triada. These cities have no walls but have some great palaces decorated with frescoes. The best preserved is the Palace of Knossos.
The burials were held in caves but also in large vats where the bodies were introduced.
Beautiful objects have been found decorated ceramic, copper and bronze and many other imported from Egypt. It is assumed that the island of Crete was an obligatory port on a trade route linking the Middle East and the rest of Europe.
The Minoans had a script that has not yet been deciphered at first was hieroglyphic and later evolved into the so-called Linear A and Linear B.